Please note: The copyright of our work belongs solely to Orthodox Pebbles. We are offering our material to the public to be used as a whole, and only for classroom and personal use. This means we do not allow for users to break our material up into individual parts (images or text), or to download decorative images from our website, and use those parts in their own creations – analog, digital, or online – even if these creations are only meant to be used for teaching. For example, a user is not permitted to include our material in any way in their own slideshows, worksheets or videos (local or in the “cloud”), even if they mention us as the source. If you are interested in creating a specific teaching activity with our material, please contact us – we may be able to create it instead, for the benefit of the whole Orthodox community. Additionally, if you want to showcase our material in a website, newsletter, blog or social media post, please contact us first. Finally, we kindly ask that you do not directly share the material you download from our website with others. Please point them to our website instead, so they can download it from here.

Thank you for being fair and respectful of our work!

We have created a FABRIC LEARNING SET covering the parables of the Publican and the Pharisee and of the Prodigal Son, to help teach these topics in a hands-on way. It can be used together with the material on this page during the period of the Triodion.

With the above main points in mind, objectives for a lesson targeting young children could be set up as follows.

Younger children should be able to:

Additionally, older children should also be able to:

Using the resources offered on our webpage, a possible lesson outline could be as follows:

This is the third parable told by the Lord after the Pharisees had reproached Him for sitting and eating in the company of sinners. In this parable He is referring to the sinner who consciously chooses to sin (the Prodigal Son), and also to the one who does not want to repent (the brother).

The story is about a father and his two sons. The younger son asks his father for his share* of the inheritance and takes it. He goes in a far away place and lives wastefully, until there is nothing left from his inheritance. When he finds himself broke, alone, miserable and in need, he goes to work for a man who raises swine;** he is so hungry that he even craves the pig food. At some point he comes to his senses. He realizes what he lost at his father’s house, his pitiful situation and cries in repentance. Then he decides to return home to his father, asking him for forgiveness in the hopes that he will get a job as a servant.

He begins the long way back home. His father, who has been waiting for him, sees him from afar, runs*** to him, embraces and kisses him. He throws a big party to celebrate the return of his lost, and now found, son.

When the older brother, upon returning from the fields, finds out what is happening, he becomes envious and angrily reproaches his father. The father emphasizes that the older brother has always been enjoying what the paternal home has to offer, and, instead of being jealous, he should also celebrate for the return of his lost younger brother.

* At the time, the oldest son inherited two-thirds of the paternal property. The rest of the property would be divided among the other sons. It was a great insult and disrespect for a son to ask for his portion of the inheritance while his father was still living. The punishment of such a son, who would return to his paternal house, was severe: he would be beaten, or even stoned – in the best case, he would be treated as a servant and ordered to do the most lowly work.
** The swine were considered unclean animals by the Jewish people; the Mosaic Law forbade the Jews to either raise pigs or consume pork.
*** In the Jewish culture it was considered inappropriate for a father – an older man – to run. However, in the parable, the father did not wait for his son to come to him: instead, he ran to meet him. This self-humiliation indicates how intensely God will seek those who are lost in sin and alienated from Him.

On a first level, the father in the parable is God the Father, Who loves all humankind; the older son is the group of the righteous Jews (the Pharisees) who keep the Law of Moses and consider themselves as non-sinners; and the younger son represents the sinners with whom Christ is sitting and eating.

On a second level, the Holy Fathers of the Church have interpreted the story as follows:

There are many variations of the icon. Some focus only on the scene of the embrace between Father and younger son. 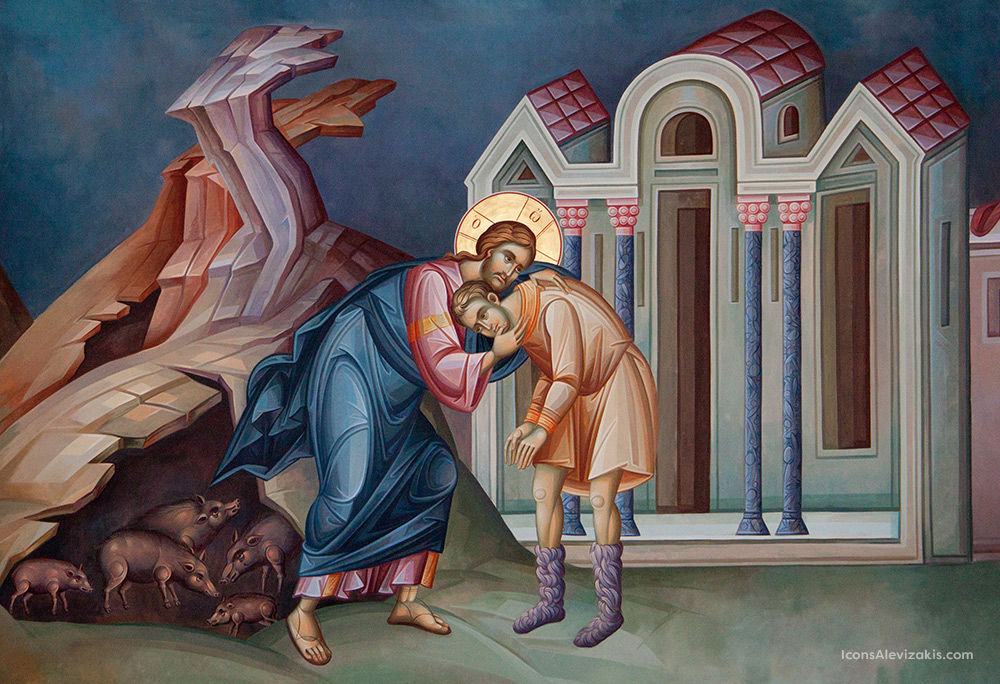 Other icons tell the whole story of the parable. In these versions, the embrace is the central element, usually depicted larger in size, while around it other scenes of the story are shown. 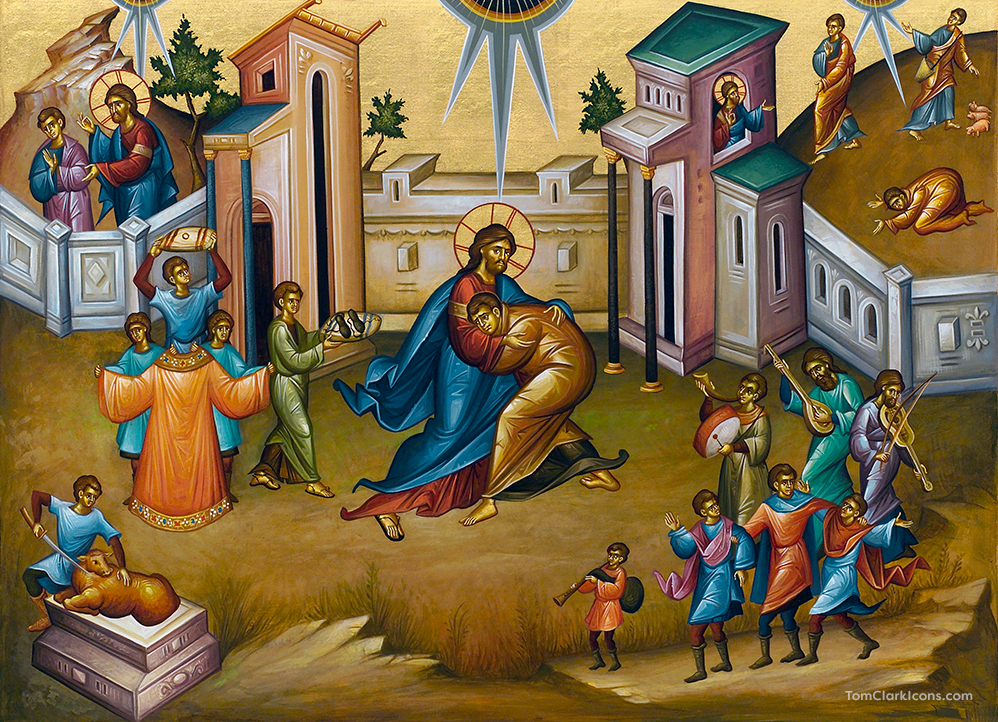 In some icons we can also see angels and other bodiless powers standing around an empty throne: that means that the Lord Jesus Christ descended from His heavenly Kingdom to meet, embrace, heal and restore the repentant humankind in the Kingdom.

Please note: We have had questions by some of our readers about using Sister Vassa’s videos in some of our pages. We understand that Sister Vassa supports some views that are considered controversial. The fact that we are sharing some of her videos doesn’t mean that we agree with the entirety of her online content. On the other hand, to the extent of our knowledge, we do find the specific videos in line with Orthodox teaching and helpful for discussing the specific topics.

Special thanks to Sister Vassa Larin for allowing us to embed her video in our webpage.

Scrapbooking paper used in the illustrations:

YOUR SUPPORT IS APPRECIATED!

At Patreon.com/orthodoxpebbles, you can pledge to offer us a small contribution every time we create new content. When you become our patron, and depending on your pledge tier, we will send you a little gift as a token of our appreciation.

Working on Orthodox Pebbles has been an amazing blessing for us. Our mission is to keep adding to our digital collection of high-quality, FREE, online Orthodox Christian educational resources for young children – an endeavor that requires a significant time investment, and expenses for software, art supplies and web hosting. Given the religious focus of our project, we decided from the start not to charge for our digital material, so anyone – even those who could not afford to pay for it – could have access to it. We also pledged never to include advertisements in our website. If you are finding our content useful, you feel it is worthy enough not to be used for free, and are able to, please consider supporting our project; we are sincerely grateful for your contribution.

Please do not copy or directly redistribute any of our web content without asking for our permission.

Thank you for being fair and respectful of our work.

At Patreon.com/orthodoxpebbles, you can pledge to offer us a small contribution every time we create new content. When you become our patron, and depending on your pledge tier, we will send you a little gift as a token of our appreciation.